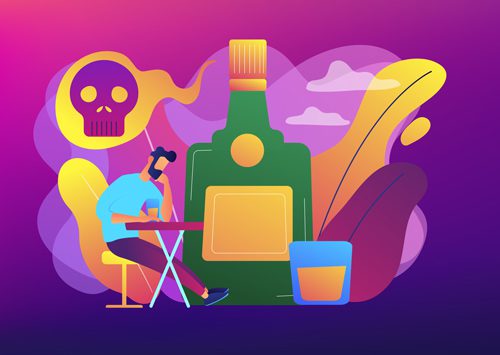 Since 1987, the National Council for Alcoholism and Drug Dependence (NCADD) has organized and sponsored Alcohol Awareness Month in April. In its early years, the program was aimed at college-aged students whose newly found freedom might lead to drinking too much. Over the years, Alcohol Awareness Month has grown to become a national movement with the purpose of increasing awareness of alcohol addiction and its causes, effects, and treatments. It also helps to increase outreach and educational programs while helping communities and families cope with the drinking problems they are facing.

Alcohol Use Disorder Is a National Crisis

Since 2013, individuals with drinking problems have been diagnosed as having alcohol use disorders, which are divided into three levels: mild, moderate, and severe. Statistics from the Centers for Disease Control and Prevention (CDC) and the 2018 National Survey on Drug Use and Health (NSDUH) show the predominance of alcohol use disorders, alcohol use, alcohol-related conditions, fatalities, and underage drinking.

What Is a Standard Drink?

A standard alcoholic drink in the United States contains 0.6 ounces (1.2 tablespoons or 14.0 grams) of pure alcohol. That is the amount generally found in:

What Is Considered Excessive Drinking?

The Short-Term and Long-Term Health Risks of Excessive Drinking

Drinking too much alcohol has many immediate effects that increase the individual’s risk of harm. The person often acts dangerously or takes risks they normally would not, such as driving under the influence, having unprotected sex, or having sex with multiple partners. These risky behaviors often result in vehicle accidents, unintended pregnancies, or sexually transmitted diseases. Excessive drinking is often the cause of injuries from falls and burns. Additional short-term health risks include:

Excessive alcohol use over time often leads to the development of chronic diseases and other serious problems such as heart disease, high blood pressure, stroke, digestive problems, or liver disease.

Other long-term health risks include:

If you or a loved one is struggling with an addiction to alcohol or drugs, now is the time to get help. At English Mountain Recovery, located in the Smoky Mountains of Tennessee, our team of caring professionals will help you take back your life. Give us a call to learn how to begin your journey to a sobriety.

Considering alcoholism treatment in Tennessee? To learn more about programs offered at English Mountain Recovery, call and speak with someone today at (877) 459-8595. We are ready to help you or your loved one recover.
0Shares
PrevNext