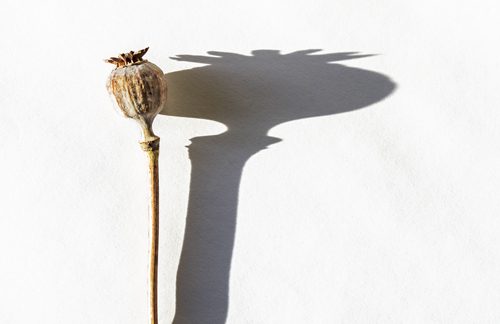 A powerful opioid, heroin is a highly addictive and dangerous drug. The Drug Enforcement Administration (DEA) has classified it as a Schedule 1 drug. Heroin, like other drugs in this classification, is a controlled substance that currently has no medical use in this country. The potential for heroin abuse is high and often leads to severe psychological and physical dependence.

Heroin is made from morphine, a natural mind-altering (psychoactive) substance found in the resin taken from the seed pod of Asian opium poppy plants. When heroin is used, the body converts it back into morphine. When the drug enters the user’s brain, its molecules attach themselves to cells called opioid receptors that regulate pleasure and pain. It also affects the central nervous system and suppresses some of its functions, which cause a decrease in heart rate, respiration, blood pressure, and body temperature.

Heroin can be a brown powder, white powder, or a sticky black substance called black tar heroin. On the streets, the illicit substance is known by many different names. Big H, H, Smack, Black tar, Brown sugar, Junk, China white, Dragon, Horse, and Dope are some of the more common street names of the drug.

In the beginning, people who use heroin feel a pleasurable rush and a sense of happiness, joy, and well-being. The enjoyable feelings the drug produces cause the user to want more. As changes in the brain take place, the user needs to keep increasing the amount of heroin used to achieve the effect they crave. This quickly leads to tolerance and addiction. The person is no longer able to control their drug-seeking behaviors regardless of the negative consequences that could occur.

When a person has an addiction to heroin and they abruptly stop taking it or significantly reduce the amount they are taking, they will experience withdrawal. The symptoms of heroin withdrawal will not be the same for everyone. Factors that have an effect on the severity and duration of withdrawal symptoms include:

Depending on the above factors, some people may experience mild withdrawal symptoms such as aches in their bones and muscles, abdominal cramps, and chills. Additional symptoms of mild symptoms include:

Generally, heroin withdrawal is not considered life-threatening, but certain complications could arise that could be fatal.

According to an article in the National Library of Medicine, withdrawal symptoms may begin within several hours from when the last dose of heroin was taken and typically last seven to ten days.

The heroin addiction epidemic shows no signs of slowing down. Research shows an increase in opioid overdoses, hospitalizations, and deaths. Do not become a statistic. If you or a loved one is suffering from a drug or alcohol addiction, help is available. Call and speak to a caring professional at English Mountain Recovery located in the Smoky Mountains of Tennessee. Find out how to get the help you need and begin your journey on the road to recovery.

Are you or a loved one searching for heroin addiction treatment near Chattanooga? To learn more about programs offered at English Mountain Recovery, call and speak with someone today at (877) 459-8595. We are ready to help you or your loved one recover.
0Shares
PrevNext