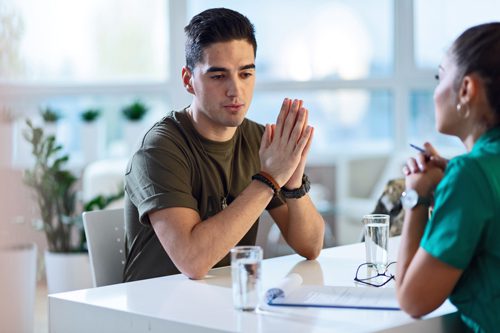 Substance use disorder is a growing problem throughout the United States. Although alcohol or drug addiction can happen to anyone, for many of our military veterans substance abuse is a significant and rapidly growing problem. According to a report by the Substance Abuse and Mental Health Services Administration (SAMHSA), 1.5 million U.S. veterans, approximately 1 out of every 15 veterans are addicted to drugs, alcohol, or a combination of the two. Another report published by the Institute of Medicine explains that veterans and active military personnel have a history of alcohol and drug abuse that has only worsened in recent years with the advent of opiate-based prescription painkillers.

Why are Substance Use Disorders so Prevalent Among Veterans?

When military personnel return home from combat, they often encounter a number of problems while readjusting to civilian life, making the transition very difficult. For a number of these military veterans, personal challenges often include severe mental health issues, complex health problems, and overwhelming economic conditions and challenges.

Many veterans receive a diagnosis of a co-occurring disorder: a substance use disorder combined with a mental health disorder. For example, if an individual is suffering from anxiety and becomes addicted to prescription pain medication, they would be diagnosed as having a co-occurring disorder. For treatment to be successful, both disorders have to be treated at the same time. If they are not treated together, the person will likely continue to relapse and may face serious health complications in the future.

Many veterans witnessed horrible violence when they were in combat. Often, this experience results in PTSD (post-traumatic stress disorder), leaving veterans afraid for their own wellbeing and personal safety even in civilian life. The rate of substance abuse and addiction is higher for these veterans.

There are many other risk factors for substance abuse and addiction among veterans including:

Once known as “battle fatigue” or “shell shock,” PTSD is often caused by being a part of or being a witness to terror attacks, warfare, extremely horrific violence, or other extremely tragic or startling events. For veterans, PTSD can also occur after experiencing sexual assault or harassment known as military sexual trauma (MST). Military sexual trauma can occur to both women and men and can take place during training, war, or peacetime.

According to a report by the United States Department of Veterans Affairs:

Very often veterans suffering from post-traumatic stress disorder self-medicate using alcohol or drugs as a way to deal with their PTSD symptoms.

What are the Symptoms of PTSD?

PTSD often develops immediately following the event. However, there are also numerous cases where the person does not experience any PTSD symptoms for weeks, months, and even years. Veterans with PTSD relive the traumatic event over and over again through flashbacks, triggers, or nightmares. They may engage in behavior that is self-destructive, including substance abuse or self-harm. They generally feel “on edge” or “keyed up” and suffer from hyperarousal. They experience feelings of detachment and hopelessness, have difficulty concentrating, and experience memory problems. They may try to avoid any situation that reminds them of the triggering event.

Other PTSD symptoms include the following:

The primary reasons for hospitalizations of United States military personnel are mental health conditions and substance use disorders. More than 20 percent of veterans with PTSD also suffer from an addiction to drugs or alcohol. The following statistics are also important to keep in mind when considering how veterans are affected by substance abuse:

Although drug and alcohol addiction are chronic illnesses, successful management of these substance abuse disorders is possible when the individual receives the correct treatment including detox, traditional and holistic therapies, and counseling. A mental health resources page explaining what treatments are available from the Veterans Administration can be found at the United States Department of Veterans Affairs website. Here at English Mountain Recovery in Tennessee, we understand how trauma plays into both mental health and substance use, and we offer a full continuum of treatment services for anyone suffering from a substance use disorder.

To learn more about programs offered at English Mountain Recovery, inpatient addiction treatment in Tennessee, call and speak with someone today at (877) 459-8595. We are ready to help you or your loved one recover.
0Shares
PrevNext