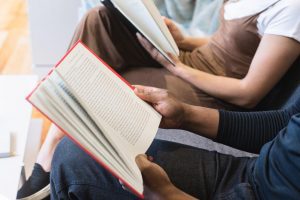 Reading is so much more than just a temporary distraction from the reality of your daily life. The books you choose can help you gain a new perspective on your own struggles or better understand what the people you care about are going through.

Addiction and recovery have long been popular themes in the memoir genre.

Although it’s important to note that no two people with substance use disorders are exactly alike, memoirs can be useful tools to improve your understanding of what it means to come back from the brink of addiction and build a successful sober life.

Addiction and Recovery Memoirs Written from a Male Perspective

From inspirational bestsellers to celebrity memoirs, these tales of addiction and recovery offer advice, encouragement, and tips to help you face the challenges of sober living head-on.

Tweak: Growing up on Methamphetamines by Nic Sheff: Drunk for the first time at age 11, Sheff soon graduated to pot, cocaine, ecstasy, heroin, and crystal meth. This bestseller paints a vivid picture of the lies substance abusers tell themselves to deny they have a real problem. We All Fall Down: Living with Addiction is the sequel focusing on Sheff’s rehab experience and continuing efforts to stay clean.

Running with Scissors by Augusten Burroughs: This memoir recounting Burroughs’ troubled childhood explores what it’s like to grow up with a parent who suffers from mental illness and addiction, as well as how that trauma influences the development of an adult substance use disorder.

A Million Little Pieces by James Frey: Frey’s memoir describes his journey through rehab after abusing alcohol and crack cocaine. A Million Little Pieces is controversial due to later acknowledgment by Frey that some of the events portrayed were fictional, but the representation of hitting rock bottom due to substance abuse has struck a chord with millions of readers.

Permanent Midnight by Jerry Stahl: Detailing Stahl’s heroin addiction and experiences with Hollywood drug culture while working as a screenwriter with a $6,000 a week drug habit, this memoir explores the self-destructive tendencies that fuel an addict’s inner life. It was adapted into a 1998 film starring Ben Stiller.

Drunkard: A Hard-Drinking Life by Neil Steinberg: This memoir by Chicago Sun-Times columnist Neil Steinberg looks at how you can appear outwardly very successful, yet struggle with inner demons. Beginning with a look at his personal rock-bottom moment, Drunkard shows how court-ordered alcohol treatment counseling helped him turn his life around. Steinberg is also the author of Out of the Wreck I Rise: A Literary Companion to Recovery.

Portrait of an Addict as a Young Man by Bill Clegg: A thriving business as a literary agent, supportive friends, a loving partner, and a recent stint in rehab couldn’t keep Clegg from a two-month crack binge. This memoir is a must-read if you’re interested in learning about how to move forward after relapse.

Recovery: Freedom from Our Addictions by Russell Brand: Part memoir and part self-help guide, this book uses Brand’s talents as one of the world’s most celebrated stand-up comedians and work as a longtime mental health/drug rehabilitation activist to educate, motivate, entertain, and inspire.

Memoirs by Women Who Struggled with Addiction

Although both men and women struggle with substance abuse, the issues that influence a woman’s descent into addiction and journey to sobriety are unique. These memoirs by female writers may strike a cord with women in treatment or help their loved ones better understand the experience of a female substance abuser.

Smashed: Story of a Drunken Girlhood by Koren Zailckas: Considered shocking by many who mistakenly believe substance abuse is a man’s problem, Smashed details the experience of a young woman who took up binge drinking at a dangerously young age to cope with emotional pain and a severe lack of self-confidence.

Prozac Nation by Elizabeth Wurtzel: Wurtzel struggled with severe depression as a young woman, which led to the development of her addiction to alcohol. Her memoir is a poignant expression of the longing and emptiness that so many young women with mental health issues seek to address via substance abuse.

The Recovering: Intoxication and Its Aftermath by Leslie Jamison: Jamison takes an honest look at the role alcohol has played in both her career as writer and her life as a woman, touching on a history of self-harm, anorexia, and familial addiction despite being publicly viewed as a “nice upper-middle-class white girl.” She strives to answer the question, “What makes alcohol so alluring, and can sobriety fuel a creative life?” by looking at her own story as well as a survey of others who’ve struggled with addiction and recovery.

Blackout: Remembering the Things I Drank to Forget by Sarah Hepola: A funny yet sad look at a woman who initially equates recklessness with freedom, Blackout looks at how social drinking can develop into a full-blown addiction with real-life consequences.

How to Grow Up by Michelle Tea: A young struggling artist with low self-esteem learns that alcohol can’t soften the blow of real life in this collection of personal essays exploring what it means to consciously choose to live a sober life.

Parched by Heather King: People often think of addiction as a quick fall to rock bottom, but King eloquently describes a decades-long descent into alcoholism and how her family’s help convinced her to turn her life around. Since getting sober, King uses her experience of personal pain to inspire others to have compassion for those who are suffering.

unSweetined by Jodie Sweetin: Best known for her role as Stephanie Tanner on the hit sitcom Full House, Sweetin details her recovery from methamphetamine addiction in this utterly raw yet ultimately inspiring memoir. Even if you’re far from famous, you’ll relate to her tale of how becoming a mother gave her the courage to finally get sober.

Stories About Loving Someone with an Addiction

Substance use disorders affect the entire family. These haunting memoirs look at what it’s like to have a parent, child, or spouse with a drug or alcohol problem:

The Glass Castle by Jeannette Walls: This best-selling memoir details the author’s poverty-stricken childhood at the hands of her brilliant yet troubled father. Rex Walls likely suffered sexual abuse as a child and struggles with alcoholism that affects his relationship with both his wife and children. The Glass Castle was published in 2005 and made into a 2017 feature film starring Brie Larson, Woody Harrelson, and Naomi Watts.

Beautiful Boy: A Father’s Journey Through His Son’s Addiction by David Sheff:  Upon learning his son Nic (the author of Tweak, listed above) was addicted to crystal meth, Sheff found himself wondering where he went wrong as a parent. Going to extreme lengths to save his son, this tale of a father’s never-ending love is both relatable and inspiring.

Saving Jake: When Addiction Hits Home by D’Anne Burwell: Burwell’s son Jake began abusing OxyContin as a teenager, dropping out of college and ending up homeless on the streets of Boulder. This heartbreaking yet hopeful memoir looks at how a child’s addiction impacts the entire family.

I’m the One Who Got Away by Andrea Jarrell: Jarrell forges a close bond with her mother due to the trauma they’ve suffered at the hands of her charming yet violent alcoholic father. As an adult, she struggles to find happiness. Her first serious relationship is with a man who drinks too much, then she marries the love of her life who has been hiding a drinking problem. Intimate and honest, I’m the One Who Got Away shows what it’s like to do the hard work of helping a loved one through recovery.